Hunter is owned and loved by Cathy, Denny and Eric Twistol. He is Cathy’s heart dog and soul mate and I couldn’t have asked for a better home for him to grow up and be loved. Hunter finished his AKC championship before age 2 handled by his breeders. Cathy in the meantime worked on his JH, taking him in the field with two artificial knees and then again on to his obedience title.

He graces the front of Windwood's website, along with that of his grandson, Dante.

Hunter became the 2nd Irish Setter in Windwood history to take a Best in Show. Because of ring conflicts, a good friend Mike DeMars was asked if he would handle Hunter in the breed ring. They became such a team, that Mike showed him for the next two years for us. In July 1999, in 98 degree heat, Hunter and Mike took the breed and went on to show in group and never quit until he was awarded Best in Show. During 1999, Hunter garnered 11 Best of Breeds, 4 Best of Opposites, 4 group 2s and 2 group 1s in limited showing. He was ranked in the top 10 all-breed point system throughout the year and finished the year ranked #10.

The year 2000 started off with a bang as Hunter decided he wanted to add another title to his name, at the January MN Specialty, Hunter went Best in Specialty show handled again by his good friend Mike DeMars. In July of 2000, in Duluth, MN Hunter and Mike pulled out all the stops and took back to back Best in Shows on the same day, winning the Duluth KC Dog Show and the National Field of Champions Dog Show. Finally, in August, Hunter took another Best in Specialty Show, again at the Irish Setter Club of MN show. Hunter was retired at the end of the year to return home to become Cathy’s beloved boy. He is currently being shown sparingly in the Veterans classes at specialties whenever we can convince Mike to come out of retirement and has some nice litters on the ground. Time will tell whether or not he will produce his wonderful personality and zest for life as well as his beautiful head piece and flowing coat.

NOTE:  In June 2008, we lost our beloved buddy, Hunter.  He lived almost 13 years and his impact on Windwood and those that loved him will live on long after he's gone.  Rest well, Hunter.  May the shamrocks and heather fall softly around you, until we meet again. (Cathy and Pam) 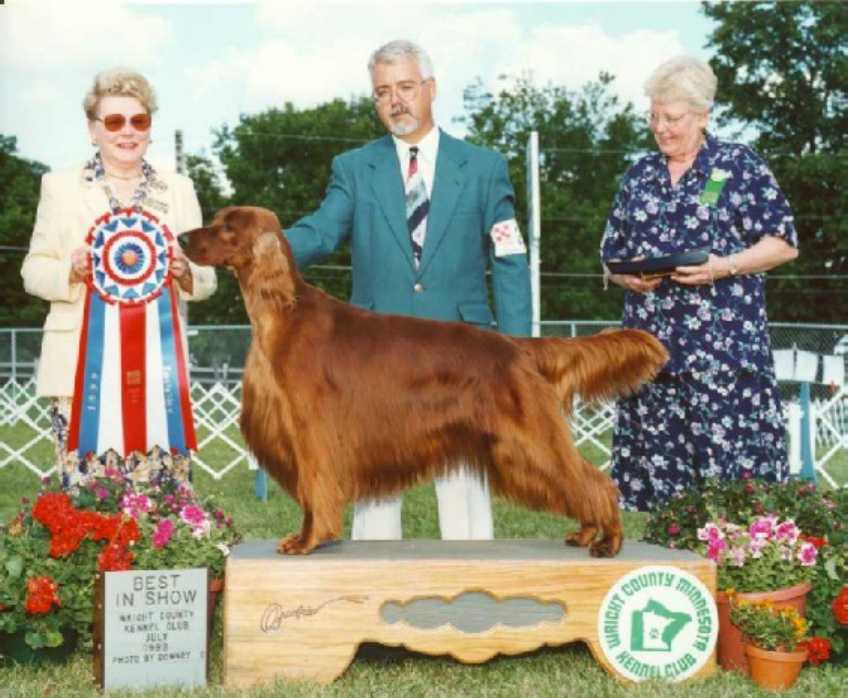