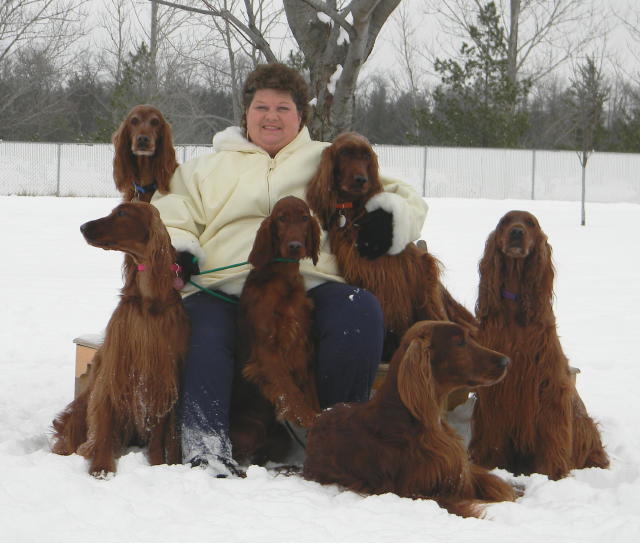 Nighthawk finished his championship in 2 months and 8 shows undefeated from the classes.  At the end of 1982, at 2 1/2 years old, he was ranked the #6 Irish Setter and #9 sporting dog in the country, handled by Ken Murray. In 1985, Nighthawk topped all previous records set in the breed with 15 all-breed Best in Shows, 4 Specialty Best of Breeds and 59 Group Is.  He was the #1 Irish and #1 sporting dog in 1985 and a Quaker Oats Award winner.  He won the breed at Westminster and the Combined, and was ranked the #1 Irish 3 years in a row.  He still ranks today as one of the winningest Irish Setters in the breed. His final show record stands at 27 all-breed Best in Shows, 21 Specialty Best of Breeds, 136 Group 1sts and over 100 additional group placements.

Ch Windwood Firebird Jacob was bred to Ch Windwood Thunderbird Myth and a litter was born in the winter of 1991. Out of this litter came Ch Windwood Phantom Skye CD, JH, VC, owned by Pam Seipkes.  Skye was a very feminine bitch that was beautiful moving and on the stack.  She finished with 5 majors owner-handled including a 5-point MN specialty win. Skye finished her CD before age 2 and at age 3 entered the field and earned her Junior Hunter title. Skye finished her show career in December of 1998 by taking a Best of Opposite Sex at the National Field of Champions Dog Show.

In 1995, Pam decided to breed Skye and asked Betty Michael for permission to continue using the Windwood name.  Shortly after Skye was bred, Betty decided to pass the torch to Pam who has continued the Windwood line of Irish Setters with Betty as her close friend and mentor. Sadly only two puppies survived a difficult whelping, but oh what dogs they became, namely:  BIS/BISS Am/Can Ch Windwood Autumn Tradition JH, CD, CGC, VC and Am/Can Ch Windwood Autumn Tapestry JH.

Hunter's grandson, MBIS MBISS Ch. Windwood's Inferno (Dante) has had a spectacular career. Please take time to look at his win from 2009 Westminster. Sincere thanks to Dante's handler, Gwen Meyer, on Dante's fabulous showing at the Garden.