Song shown at her "coming of age" show.  She is shown winning a 4-point major at the summer MN specialty.

She is also shown finishing her championship in Duluth, MN.

My Song, with the shoulders to die for as a puppy, went through every "puppy uglies" stage growing up, but boy did it pay off to sit on her until she turned two!

At her very first show in August of 2000, Song took off with a bang winning a 4 point major at the MN specialty.

Ten (10) shows later she was finished winning another MN 5-pt specialty major in January 2001 and another 5-point major that same weekend! Song’s major skill in life is to figure out how to open anything she wants; be it the garbage, the bread drawer or gates!!

I am saddened to report that I lost my beloved Song on August 26, 2003. She will forever live on in my memory. 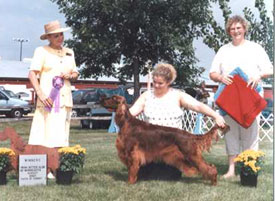